20 THINGS TO KNOW BEFORE TRAVELING TO MALTA

Gleb and I have been living on the island of Gozo, in Malta, since may 2014. Even if we had read a lot of documentation before we left, there are some information that you can’t really find on the internet… I made a list of 20 anecdotes that could be really helpful if you plan on traveling to Malta.

1 ► The maltese people drive on the left of the road.

2 ► You can totally drink tap water, but it tastes really bad (it is in fact desalinated sea water). You might want to buy bottled water…

3 ► This is less of a problem in Malta, but if you go to the island of Gozo, try to always have cash money with you. A lot of shops, grocery stores and restaurants do NOT accept credit cards. And there are not a lot of ATM either. In Gozo, they are mainly in Victoria, the main city.

4 ► The maltese people drive very fast, anywhere on the road (to avoid potholes), and really abruptly. Priorities don’t really exist, it is more like a “let’s see who will go first” rule. Oh, and it is really frequent to see a driver turning around or parking in the middle of the road. Be really careful if you drive !
For the record, Malta counts 420 000 unhabitants… and more than 300 000 accidents occured between 2012 and 2013. Do the math…

5 ► If you go to Malta during the summer (between may and october), check if your hotel or your rental has the air conditionning. You can thank me later…

6 ► If you plan on using the bus (especially in Gozo), check the schedules… Most of them run only one time per hour. I’ve already written a well explained post about the maltese transports where you can find a lot of informations.

7 ► Don’t worry if you hear loud detonations during a beautiful summer afternoon… No, the war hasn’t started yet, this is just fireworks. The maltese love to fire them for almost every occasion, and they often run tests during the day… It’s surprising, at first.

As a bonus, here are some pictures of a pretty gozitan fireworks, taken by me :

8 ► On the island of Gozo, some “festas” happen all summer and go from village to village. They are religious feasts that all celebrate a different saint. The local church is all illuminated, there is always a religious parade followed by a fanfare, a lot of gozitan wine, and of course… fireworks.

9 ► Even if the maltese weather is really mild in winter, I don’t advise you to travel to Malta from october to january. It rains a lot and there are a lot of frequent and violent thunderstorms. For the record, last october, all my outdoor furnitures ended up in my pool and one of my windows was blown off by the wind…

11 ► The small shops and grocery stores open really early in the morning – around 6am – but usually close from noon to 4pm to avoid the heat wave. They are often open on sunday.

12 ► The abandonned buildings that you can see everywhere are not this way because of the economic crisis. It is only because some government regulations destroyed the estate market and forced a lot of builders to leave their work unfinished.

13 ► Gozo is one of the safest islands in the world. You can leave your car open, with the keys and your wallet inside, and you can almost be sure everything will still be there the next day.

14 ► A lot of maltese buildings have a typical british architecture. This comes right back when Malta was a british colony. You can even find the famous red phone booth here !

15 ► In Gozo, you can discover the Ggantija temples, one of the oldest archaeological site of the world, which is listed as a UNESCO world heritage. I’ve written a post about this place, that you can (re) discover here. 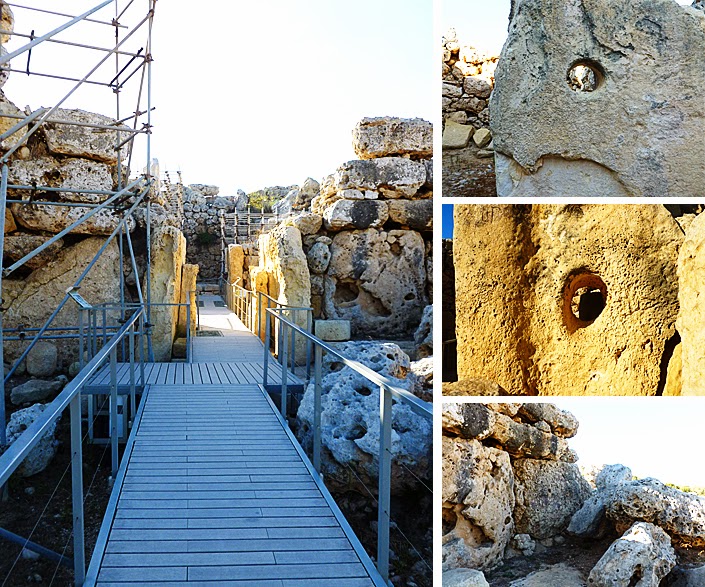 16 ► The sun rises and sets really early, even during the summer. At 5am, it is broad daylight, but at 9pm, it’s pitch dark.

17 ► All the unhabitants speak a perfect english. They also speak maltese, a really complicated language. I wanted to learn it when I first arrived in Malta, but the maltese themselves advised me not to since it would be difficult, and let’s say it, a bit useless.

18 ► Ladies, if you like to sunbathe topless, know that this is forbidden on the maltese beaches. You could be expelled from the country for doing so.

19 ► 90% of the maltese people are practicing catholics. Therefore, you will find hundreds of churches to visit… But try to wear a decent outfit (with your shoulders covered) if you don’t want to be asked to leave.

20 ► And finally, you might very well be enchanted by the maltese archipelago, the beauty of its landscapes, the kindness of its people, the mildness of the weather… I’ve talked about how it feels to live on a tiny island in a previous post.

More information about Malta and Gozo ?

If you are looking for other information about Malta and Gozo, you may find what you need in the “Malta & Gozo” section situated in the menu at the top of this page. More simple, you can read my F.A.Q. post about the maltese archipelago to see the questions I get asked the most.

Here are the latest developments about COVID-19 in Malta. I know that some of you intend to visit…
1 Shares
1
0

After Valletta, Malta’s Blue Lagoon is certainly the most popular place in the maltese archipelago. So much so…
0 Shares
0
0

After living on this island for more than 5 years, I’ve had the occasion to try many good…
0 Shares
0
0