Today, I wanted to talk about my last favourite novels. But before that, I’d like to tell you more about my relationship with reading, because it’s the first time I’m mentioning this on the blog.

I’ve always been one of those persons who love reading a lot. My father taught me how to read himself, when I was very young. Good thing he was patient, though : I remember that I couldn’t assimilate that the letters “e” and “t” side by side formed the sound “é” (french is my mother tongue, as you probably noticed since my english is not perfect).

From that moment, and this until high school, I’ve lived with a book in my hands. I can’t imagine how much books my parents have bought for me during my entire childhood ! This was the only thing I demanded during supermarket trips with my mother. I think that I own the entire old collection of “Goosebumps” and “Peur Bleue”… If you used to spend your whole night wrapped up and shaky in your duvet after the reading of a scary novel, raise your hand ! Seriously, no horror movie can compete with a Peur Bleue…
But I quickly moved to more serious reads : “Une Rose au Paradis” from Barjavel, “The Hotel New Hampshire” from John Irving, or the “Da Vinci Code” from Dan Brown, when I was around 10 years old. No matter what people say, at this age, a child can understand those novels pretty well.

Obviously, after all that, I developed a strong passion for writing. I even started before I was litteraly able to write ! I used to fold sheets of paper in half to create a “book”, and to dictate a story to a member of my family who had to write it down in my “book”. Then, I used to draw some illustrations on the pages, and I was happy with my homemade book. I will not try to hide the fact that my main protagonists were princesses, fairies and forest animals. Walt Disney was my biggest inspiration, I guess…
Later on, I continued to do the same thing, but with short stories, this time. Then, with novels… that I never finished.

My bursting imagination quickly catched the attention of my french teachers who corrected my essays. During my first year of college, when I was 11-12, one of them told me about a contest organised by the Academy of Nantes for all the young breton students. The aim was to write a short story taking place in Brittany, and involving water (the ocen, a river…). He explained to me that most of the contestants were actually entire classes of students, helped by their teacher, and that I shouldn’t be disapointed if they wrote a better story than me.
I wrote my story all by myself, and my teacher sent it for me at the Academy of Nantes.
I will always remember this afternoon. Our director was watching the class while we were doing a math exercise, that we had to go show him at his desk once done.
When my turn came, the director corrected my work, and he looked at me : “Charlotte, I have some great news for you”. I had won the contest and I was expected at the Nantes city hall to be congratulated and to receive a few gifts. I remember that I felt really proud that day. When I undertake something, I always devalue my own work, I’m always afraid of not being as good as expected, and of failure. I thought that my teachers liked my essays because I was just above the class average, or because I used the good grammar and made no spelling mistakes. But when I learned that the members of the Academy of Brittany chose my story among all the others, I realised that writing was maybe my own talent. 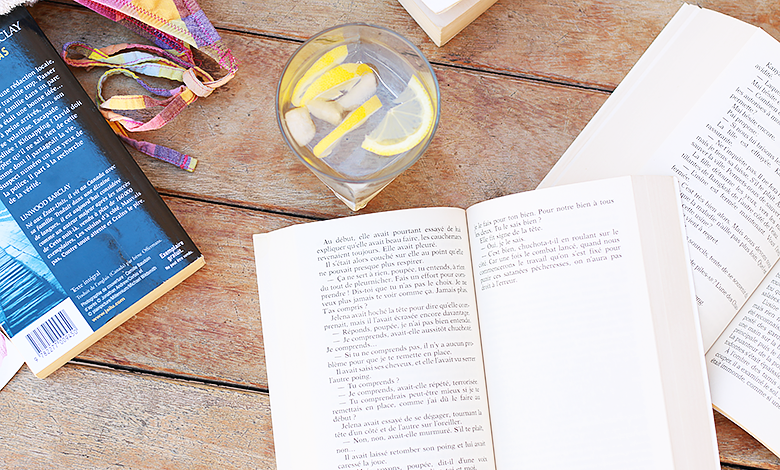 From that moment, I had only one wish : finishing a novel and being published. One of my french teacher reinforced that idea when she advised my parents, during a parent-teacher meeting, to take me to a publisher. Yet, I never did see one, I never dared sending my writings to someone. Anyway, I’ve never been able to write a novel until the end (remember : I’m the girl who gets easily bored).

I gave up on the idea of being published one day, and the only connexion I have left with this hobby is my blog. The gap between the two is wide, because I’m kind of limited, here. I didn’t create The Blue Dress Girl to share stories or poetry, and this is not what I intend to do. I created this blog to “chat”. The posts here are more like feminine press articles rather than literary essays. I’m fine with that for the moment, but I’m afraid that my creativity will one day feel like trapped. Who knows, then I might take my courage in my hands and write something worth reading ?

I went quite far with this post, I let the words carry me away. It’s not what I had in mind : sharing my last readings. Nevermind, this post is sincere and you can learn more things about me. I really hope you won’t find me pretentious after that ! Some women are talented singers, amazing pianists or great drawers… My thing is writing. It’s not any better than an other talent, but I don’t see the point of hiding it.

After this introduction of more than a thousand words, let’s get in the subject. I’m sharing a few novels that I recently read and that I particularly enjoyed.

Last Night in Twisted River takes place in the 60’s (I think ?) in the United States and tells the story of a cook and his young son, who are working within a loggers camp. After a sad accident, they both escape their small village, Twisted River, and travel throughout America. The book tells their story, with the backdrop of family stories, literature and gastronomy.

I really like Irving (especially “Until I Find You”), and I couldn’t stop myself from borrowing this novel from my mom during my last trip to France. I haven’t finished it yet, but it’s a beautiful novel, extremely well written, with a touch a black humour, typical from the author. As always with Irving, the beginning of the plot is a bit long, but we quickly feel a lot of sympathy for the characters, and we don’t regret opening that book. 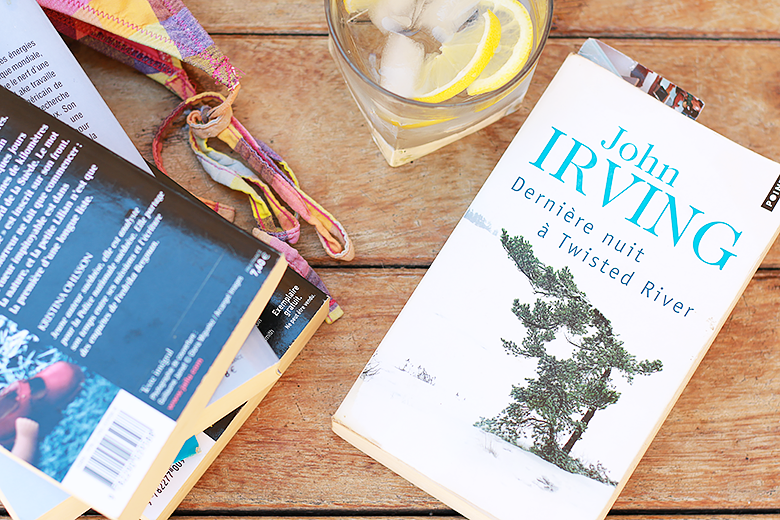 During a trip with her daughter, a mother gets off the train for a few minutes to smoke a cigarette, but the train leaves without her, with her daughter on board. At the arrival, the child is missing and the only thing left of her in that train is her pair of shoes. A few days later, the investigator Fredrika Bergman find the lifeless body of the little girl, with the word “unwanted” written on her forehead. She’s the first one of a long list, and it becomes urgent to stop this ruthless killer.

I love exciting thrillers and detective novels, so it was impossible for me to dislike this book ! The story will send schivers down your spine – difficult to do worse than a child murder – and you will easily be carried away by the plot. I devoured this novel, and I really enjoyed the way the author led the story. 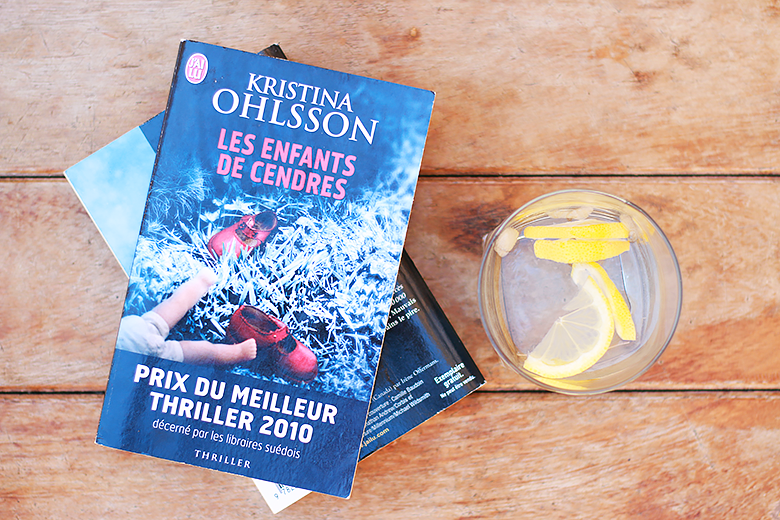 The Windup Girl takes place in Bangkok, in a futurist, post-apocalyptic universe. The fossil energy is almost completely depleted and the food companies are veritable masters at creating new species thanks to the genetic manipulation, which isn’t without consequences for the human species.
The main character, Anderson, who works for one of those companies, will meet Emiko, the windup girl, a geisha from the future, modern slave created to respond to the whims of the leaders of this devastated world.

This novel is quite interesting : the subject is worthy of interest, the author has a fertile imagination, and the near future in which the characters evolve seems so real that it’s particularly frightening. However, I have mixed feelings. I have often found the reading to be a bit laborious. During the first pages, I had a hard time immersing myself in the story and visualizing this world in which Paolo Bacigalupi takes us, and the fictional vocabulary invented by the author didn’t help.
I still recommend this book because it raises a lot of questions regarding the resource depletion, the genetic manipulation or the artificial intelligence. However, some passages can be disturbing, and the book leaves an uncomfortable feeling. 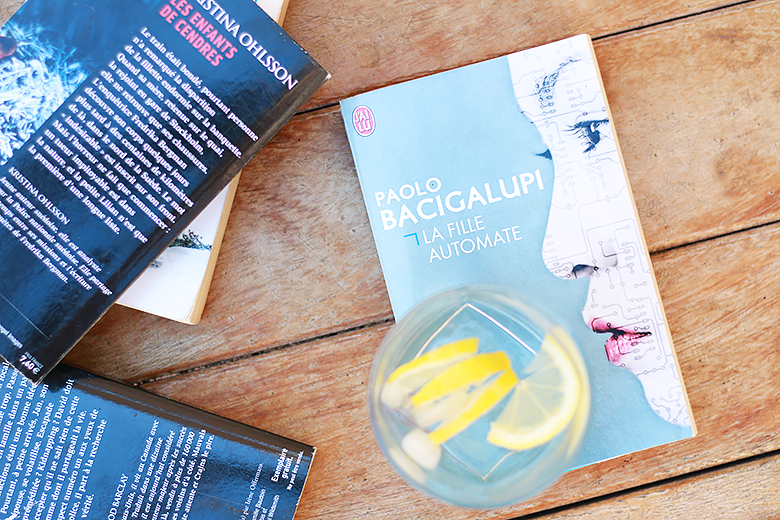 David Harwood, a journalist, decides to spend a day off in an amusement park with his son and his wife. Unfortunately, the fun won’t last long : the latter mysteriously disappear not long after their arrival. Suspected by the police, David goes in search of his wife and realises that he doesn’t know her as well as he thought.

If you like the movie Gone Girl, you will probably like this novel too. The gripping story is enjoyable, and even though the style of the author is not transcending, the plot is coherent. A good entertaining polar for this summer ! 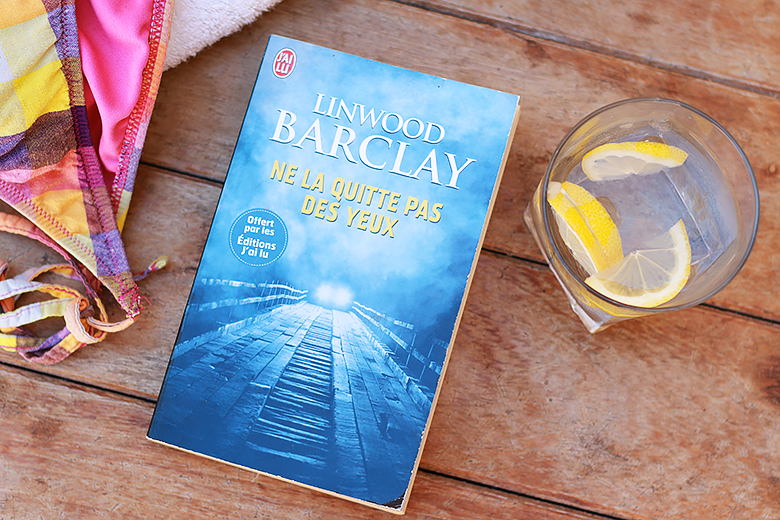 What are you reading this summer ?

After three years, which seemed endless to me, I am more than delighted to be able to officially…
0 Shares
0
0